The first time we thought of such a trip was when all of a sudden all of our friends became serious about their lives…“we’ll get married next year“….“we’re pregnant!“… Jakub and I looked each other in the eyes and thought: „NO WAY! That is not us, not now, not next year, just no.“ Okay, I have to admit: just because you get married doesn’t mean you cannot do a trip around the world.

But I imagine it to be pretty tough once you have kids. So the timing was just right for us. It has to be now.

Jakub: „what would you say if we take our backpacks and travel?“

Ellen: „I don’t have a backpack….but I like the idea though.“

Ellen: „then I’d have to buy a backpack, but I like the idea!“

That was more or less our conversation.

What followed were calculations about how much a trip like this would cost. Depending on the countries of course, we would pay more or less for accommodations and food. So the goal for us (and particularly for me) was to save as much money as we can. To be honest, I stopped buying clothes and suddenly, I could actually save some euros!

Since we were already convinced by our idea, we only had to convince our families as well…ONLY. Haha.

We can say: we have pretty cool families. Our mum’s reacted positively, being interested in the route, the planning, the organization, the languages we would speak. Obviously, the dad’s had other focusses: do you have enough money, what does the health insurance cover, how can we reach you???

Next thought: our jobs. Could we really just quit? Is it that easy? What would our co-workers say, or worse, our bosses?? Would they understand the reason for our resignation? Well, we would have to find out sooner or later… To sum it up, both my company as well as Jakubs‘ were so amazing in their reactions! They motivated us, they understood it, they would even wanna join us…it was so heartwarming and wonderful to receive this kind of reactions and naturally, we felt even better and more certain that this was the right next step for our lives.

From our long list of to-do’s, the most important ones were checked. What followed were several other contracts we quit (apartment, gym, internet company,..), other bureaucratic steps (new passport, ugly pictures for visa on-arrival, long term health insurance for abroad,…) and so on. And now, we have one week left…I still wonder if we really thought of everything…

But as long as we have fun and each other, what can go wrong? Oh sure, I should buy a backpack….

World, we are coming! 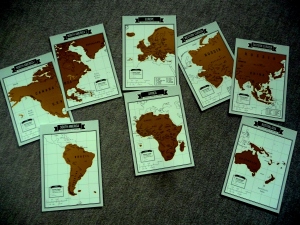